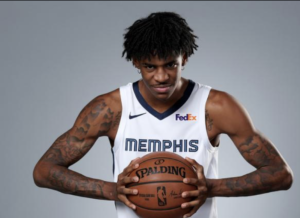 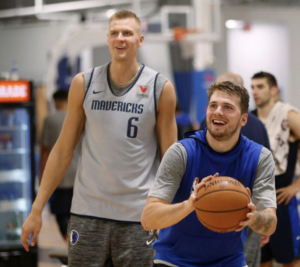 Major Storyline: The next Dirk(s)? 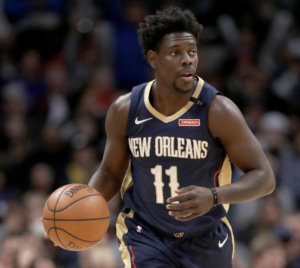 Major Storyline: The next king of New Orleans

The Pelicans saw their worst nightmare come true last season when Anthony Davis forced his way out of town, but they might have come out of it in a better situation. I really like this team. Lonzo Ball has been very poor as a shooter. His 43% career average from the free-throw line, not three-point line, means that he needs to rehaul the mechanics. It looks like he might have done that, but he will need to show it consistently in game action. Outside of shooting, he has actually been pretty good. He has elite court vision, is a very good rebounder for a point guard, and has potential as a plus defender. Injuries have hampered his production at times, which is concerning, but he has all of the tools to be an all-around star if he can figure out the shot. The Lakers may end up regretting letting him go. Jrue Holiday is one of the more underrated players in the game. He’s turned himself into a good passer, rebounds fairly well, and scored a career-high 21 points per game last year. He’s not great as a shooter (36% career), but he’s picked up his shooting and efficiency from inside the arc. Holiday has become a good defender with the ability to guard multiple positions; he and Ball should form a formidable defensive backcourt. Brandon Ingram came over with Ball in the Davis trade. He has the tools to be an elite scorer and a playmaking contributor, but he needs to develop greater consistency, especially from the three-point line. He went for 18 points, 5 rebounds, and 3 assists per game last year, showing signs of developing an all-around impact, but he could be a lot more efficient. Injuries have also been an issue with him. He just turned 22, and the Pelicans will be hoping that the move from LA will help him reach his potential. Zion Williamson will start right away at the 4, and he should be a star. He’s an explosive athlete who almost averaged 23 points and 9 rebounds per game for Duke last season to go along with over four combined steals and blocks per game. He will likely spend a ton of time making cuts and dunking passes from Ball and Holiday. His two big flaws are his passing (roughly two assists per game at Duke) and his shooting (around 33% from deep). The passing won’t be an issue with Ball and Holiday in the lineup. He will have plenty of time to develop that skill. The shooting could be the big issue in New Orleans. There will be some help on the bench, but no one in this starting lineup is a great shooter. The Pelicans will need Ball, Ingram, and/or Zion to show some legitimate progress from beyond the arc, and Zion will need to develop a midrange game at the very least to add some more variety to his offensive game. He’s not just a dunker, but adding a shot will make more room for him to get to the rim on his drives. Derrick Favors was brought in to start at the 5. Favors is a good finisher and rebounder. He plays solid defense. He’s not a shooting threat, but he should be a solid starter. Rookie Nickeil Alexander-Walker could play a big role off the bench. He went for 16 points, 4 rebounds, and 4 assists per game at Virginia Tech last year on 37% shooting, and has looked very confident in his scoring and playmaking ability so far in the preseason. Frank Jackson didn’t do a ton off the bench last year. He’s only 21; he will get more chances this year. He shot 40% from three in his one year at Duke. JJ Redick will be extremely important in whatever role he plays because of his shooting ability. He’s a career 41% shooter, and he does most other things at least at an average level. Redick might not start like he did in Philly, but he will have a big role to play either way. E’Twaun Moore has hit 43% of his threes the last two years. He’s not going to do a whole lot else, but his shooting will be very valuable. Josh Hart is the least alluring of the Davis trade package. He’s not bad, but he looks like an average bench guy right now. He probably has the potential to be a slightly better scorer and shooter, but there doesn’t appear to be a ton there. Kenrich Williams flashed the ability to contribute some shooting, rebounding, and defense in his rookie year. He will look to continue to develop in those areas in what might be a smaller role this year with the influx of players. Jaxson Hayes, the eighth overall pick, is pretty raw. He has potential as an elite rim protector and has the tools to be a good rebounder and finisher. He will need some time, and he showed no signs of a deep shot or passing ability in his only season at Texas. Hayes will definitely be a work in progress this year. Jahlil Okafor had a quietly solid year last season. He’s a traditional center with the ability to score and rebound fairly well off the bench. Kavell Bigby-Williams, like Hayes, could be a good rim protector, finisher, and rebounder at the NBA level, but he will need to develop the other areas of his game. If Ball, Ingram, and Williamson really take off this year, this is a scary team. Holiday is very, very good. Favors is good as well. Redick and Moore should light it up from deep off the bench. Okafor can provide decent minutes in relief of Favors. Alexander-Walker and Hayes have bright futures too. A lot of this team’s potential success lies in the hands of young talent, and for that reason it might be another year before they are real contenders. Still, the Pelicans should be a significant part of the playoff race, and if the Spurs weren’t the Spurs, I would probably have them in that eighth spot. 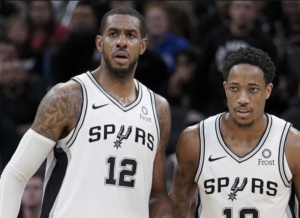 The Spurs have made the playoffs every season since Titanic was released. I’m not going to bet on that changing. This year’s team will add Dejounte Murray, who missed all of last year due to injury. Murray is a defensive menace with good rebounding numbers for a guard. His offensive game needs a good amount of work, but this team is going to run through DeRozan and Aldridge anyway. Anything that Murray can provide on that end will be a positive. Derrick White burst onto the scene last year. He has the tools to produce in a variety of areas, and he is a major athlete just like Murray. He’s not consistently great at any one thing yet, but he still has time to grow. It feels like DeMar DeRozan belongs in a different era. He only shot about 40 threes last year, and hit 15% of them. The Spurs seemed to stop the effort that the Raptors had put into expanding DeRozan’s game beyond the arc, and it worked. He went for 21 points, 6 rebounds, and 6 assists per game last season on solid efficiency numbers, and played good defense. He scored, rebounded, made plays for others, and had a really good year. Rudy Gay should start at the 4. Gay is a scorer, averaging somehwere between 18 and 22 points per 36 minutes each of the last 8 seasons. He hit 40.2% of his threes last year, a career high, which means that he will likely regress closer to his career average of 35%. He’s fine as a rebounder and defender, and will likely be the starter more often than not. LaMarcus Aldridge is the other cornerstone of this team. It hasn’t always been easy in San Antonio for Aldridge, but he also had a very good year last year, averaging 21 points and 9 rebounds per game on solid shooting and efficiency numbers. He’s not a three-point shooter either, but it works for the Spurs, especially with the shooting they have on the bench. Aldridge has said that he will work on shooting more from deep, so we’ll see what happens with that. He’s also not a great passer, but he threw in 2.4 assists per game and was fine defensively. Jakob Poeltl might occasionally start at the 5, pushing Gay to the bench. He’s a solid rebounder, and he shoots pretty well from within the paint. He usually fares pretty well as a rim protector and in guarding other traditional big men. He just hasn’t played that many minutes, only averaging 16.5 per game last year for the Spurs. It’s unlikely that he will start unless he or Aldridge are able to expand their range due to the floor spacing problems they create. Patty Mills will likely be the first guard off the bench. He’s a very good, high volume shooter (39% career from deep). He has improved as a playmaker and defender throughout his time in San Antonio. Bryn Forbes is another elite, high volume shooter (43% on 5 threes per game last year). He’s improved as a rebounder and defender. Both Mills and Forbes can make plays for others when they need to. Marco Belineli is another high volume shooter off the bench with a career hit rate of 38%. These three are a formidable group of snipers. Lonnie Walker IV is an athlete like Murray and White. He’s probably even more special athletically, but he just wasn’t able to stay healthy last year. Walker had a great summer, and he’s a candidate for a White-like breakout season. DeMarre Carrol will back up DeRozan and Gay. He’s fine offensively and a 36% career shooter from deep, and he has the ability to guard good wing players. He’s past his prime, but he will bring some needed wing depth to San Antonio. Trey Lyles is fine defensively. He’s an inconsistent shooter, but he can stretch the floor when he’s hot from deep. He should play some solid minutes off the bench. Luka Samanic is a 19-year-old from Croatia. I wouldn’t expect much of an impact from him this season, but he has potential as an athletic, 6’11” big who has flashed an ability to score both in the paint and beyond the arc. Drew Eubanks and Chimezie Metu both spent most of last year in the G League, but they have promise as solid rebounders, finishers, and interior defenders. They will both look to break into the rotation this year, and that might hinge on their ability to develop a consistent three-pointer. Dedric Lawson is a rookie out of Kansas. He will likely only play meaningful minutes in the G League. I’ve never watched Titanic. I’ve also never watched an NBA regular season that ended with the Spurs going home. I just don’t see either of those things changing this year. This team has two good leaders in DeRozan and Aldridge, a number of solid shooters and role players, a few dynamic athletes, and Gregg Poppovich. This last playoff spot will come down to the Spurs, Kings, and Pelicans, with the Mavs and Timberwolves hoping to push themselves into that group. I’m taking the Spurs as long their streak is alive. 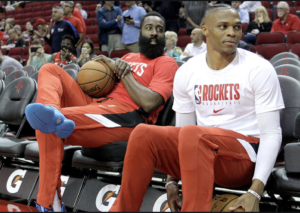 Major Storyline: Getting over the hump