The Cavs were absolutely awful last year. The Knicks might have been worse. Luckily for New York, this roster is almost completely different. 15 players played 20 or more games for New York last year. Only six of those players remain, and only three (Smith Jr., Knox, and Robinson) are likely to play major minutes to open the season. There is a promising young core in place, but it needs a lot of work. The Knicks have a tough decision to make. Do they lean on the youth for the future or ride the veterans in a quest to make the playoffs? Summer League showed that RJ Barrett has plenty of kinks to work out, even though he has the tools to be an elite scorer. Kevin Knox could be a decent wing, but he needs more time to get there. His passing was pretty terrible last year, and his shooting numbers need to go up. They’re mostly slightly below average, and his PER of 8.7 was less than stellar. He could be much stronger as well. Mitchell Robinson has all the tools to be a rim protecting, inside finishing big. On the other hand, he didn’t attempt a three last year, and his passing rivals Bismack Biymobo’s. He also needs time to develop. Dennis Smith Jr. has potential, even if he may never fully tap it. He can score. But he has shown no signs of being a good shooter, and his offensive efficiency is well below average. Additionally, after a promising start, his defense seems to have taken a turn for the worse. Still, he’s athletic, he can pass fairly well, and he’s absolutely worth taking a chance on. Allonzo Trier projects to be a decent shooter with average numbers in other areas. He should be a solid role player. Damyean Dotson was thrown into the fire last year, and he wasn’t particularly good, but another year in the league could turn him into a solid role player as well. It’s still unclear why Frank Ntilikina was a top ten pick. He’s been an okay passer, but a terrible scorer and shooter. Ntlikina’s PER last year was 6, not even halfway to league average. He just has not been a good player. Still, he looked somewhat promising this summer, and the Knicks are not at all in a position where they can afford to move on from potential talent. Former Michigan Wolverine Ignas Brazdeikis could be a decent scorer, but it’s not clear that he will have much of a role this year. Playing all of these guys as much as possible would likely not be great for the Knicks playoff chances, but it would be the best option for the team’s future. The other option is to ride the veterans that have been assembled in New York. Elfrid Payton has turned himself into a decent player. He can score some, and he passes and rebounds well. He still can’t shoot, but he would likely be an upgrade if Smith Jr. struggles. He is also only 24, so it wouldn’t be the end of the world if he becomes the Knicks’ focal point this season. Payton can be a solid game manager at the point. Still, Smith Jr. likely has more potential, and the Knicks should try to get whatever they can out of him. Reggie Bullock and Wayne Ellington will provide some shooting off the bench, but they are mostly replacement level shooting guards. They should not take many of Barrett’s minutes, but the temptation might be there if he struggles early. The forward spots are especially concerning. Knox needs the minutes, but the Knicks went out and signed not one, but four forwards. Julius Randle has turned himself into a very good NBA player. He’s still 24, and he will take the 4 spot without any issues. He won’t be enough to carry all the young guys to a good record but surrounding him with solid talent could lead to an improbable run for a lower seed in the East. Along with Payton, that talent comes in the form of Marcus Morris, Bobby Portis, and Taj Gibson. All three are good, solid NBA players. All three will want minutes. None of the three will likely be in New York beyond this season. Playing Knox a ton will be best for the future of the franchise, but all of these guys represent an immediate upgrade for this year. All three are also capable of stealing minutes from Robinson or pushing up Randle to do the same. The Knicks went from a team with a few young pieces surrounded by a bunch of nobodies to a team with a few young pieces surrounded by a bunch of decent power forwards. They will be better, but it’s not clear that they should be. The playoffs might be a distant possibility if the veterans get their minutes, but it may not be the best one for New York right now.

Major Storyline: Can Kyrie carry the load without KD?

The Nets made some huge additions this offseason, but it came at a cost that seems to have been overlooked by many. All of the offseason losses accounted for almost 500 games, over half of the team’s minutes and points, almost 60% of the team’s rebounds, assists, and steals, and roughly 40% of the team’s blocks. Kevin Durant is worth it, but he likely won’t touch the court until next year. It’s not clear that Kyrie Irving can pick up the slack. Irving is an elite scorer and shooter with good passing and rebounding numbers. He is, without a doubt, an offensive weapon. His defense has also improved over the last two years, but part of that might be due to his switch to Boston. Either way, Kyrie’s an improved defender at this point in his career, and he is close to being one of the top 10 players in the NBA. He was also well short of contention with last year’s Celtics team, and it’s hard to say that this year’s Nets team is any better than a team with Al Horford, Jayson Tatum, Marcus Smart, and Jaylen Brown. Backup guard Spencer Dinwiddie is another good scorer despite average perimeter shooting, and he provides decent playmaking and passing. Dinwiddie will produce points coming off the bench. Caris LeVert is also an average shooter and has been injury prone since college, but if he can stay healthy, he promises to be a good scorer and playmaker as well. He went for 21 points, 5 rebounds, and 3 assists per game in the playoffs, which has Nets fans rightfully hoping for a big year from the 25-year-old. Joe Harris has turned himself into a sniper, leading the league in shooting nearly 48% from deep last year. He’s improved his passing and rebounding to average levels, and his defense is fine as well. The reigning three point champ should be a great floor spacer for Irving. Garrett Temple and Theo Pinson will soak up some minutes behind these four. David Nwaba is likely too far down the depth chart to make much of a difference. Taurean Prince is a more intriguing bench option. He’s high energy, can score some points, and has worked up to about 39% from deep. He’s also fairly young and will look to further develop his game in Brooklyn. The power forward spot is a mess with Durant out. Rodions Kurucs might have started. He seemed like a fine defender in his rookie season, but he didn’t do much else especially well. It might not matter since he was arrested for choking his ex-girlfriend in September. It’s not entirely clear how that will turn out. Wilson Chandler might have backed him up. Even though he’s long past his most productive days and doesn’t figure to produce a whole lot, he knows how to play in the NBA. Unfortunately, he is suspended for the first 25 games. Lance Thomas is in a similar situation, minus the suspension. Dzanan Musa played 9 games and roughly 40 minutes in his rookie year, so he is a complete mystery. No matter what happens with these four guys, the power forward spot is going to be a weakness as long as Durant is sidelined. Luckily, the same cannot be said about the 5 spot. Jarrett Allen is a good, young center closing in on double-double averages. He’s a good defender and is at least making an effort to improve his passing and perimeter shooting. He should be very good in a couple years. DeAndre Jordan is not as good as he once was, but he can still put up points and rebound. His free throw shooting is vastly improved, although his defense has taken a hit in recent years. He should be a good mentor for Allen. Rookie Nicolas Claxton will likely get some minutes to show what he’s got too. The Nets should be able to separate themselves from the bottom two playoff teams in the East. They have an elite scorer and playmaker at the point, a sharpshooter and an emerging scorer and playmaker at the two and three, and a promising young center at the 5. Spencer Dinwiddie and DeAndre Jordan are good options off the bench. That being said, it’s not easy to see them becoming real competitors this year. That will change when Durant returns, but right now this is a roster missing its best player. There’s a KD-sized hole at the 4 for the best team in New York, and that likely won’t be filled for another year. 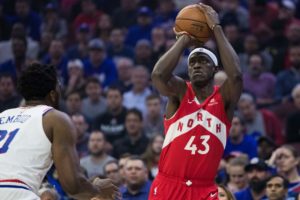 Major Storyline: Will they blow it up? 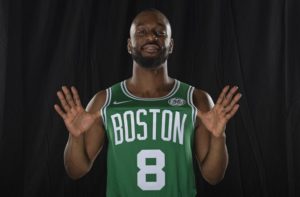 Major Storyline: Living up to the hype 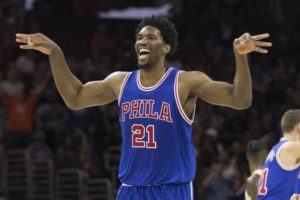